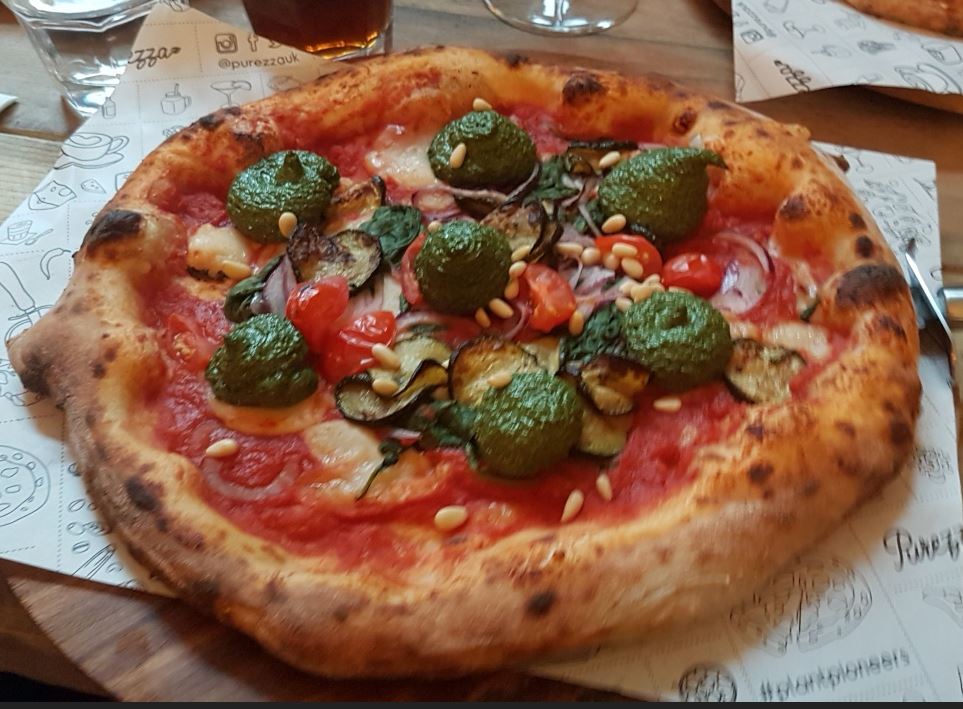 London has an award winning vegan pizzeria in Camden, Purezza. There are also many pizza restaurants and take-aways that are now offering vegan cheese. If visiting a non-vegan cafe/restaurant always double check that you are ordering a pizza with vegan cheese and check that the base is also vegan. If need be tell the proprietor you have an allergy to dairy.

Below is a list of vegan and vegan-friendly pizza restaurants in London:

​MOD Pizza
Just 1 location in Central London, and 1 in Borehamwood. Tell them you are vegan when you arrive and the staff will change their gloves and take toppings from sealed containers to ensure no cross contamination. They also have vegan cheese available (personally i prefer their pizza without vegan cheese). As many toppings as you like and build your own pizza for just £7.87. Located at 17-18 Irving St, WC2H 7AT which is located to the south side of Leicester Square. https://modpizza.co.uk/

Pizza Express
Of the chain restaurants, this is our favourite. They now have a vegan menu. The Giardiniera - which is very tasty, is automatically vegan.  Some of their other pizzas (such as the Veneziana) can be veganised . Pizza Express state it is important for you to mention how strict your diet is to the manager on duty, so as the chef can implement all necessary procedures to avoid cross contamination. On request their dough balls, bruschetta and garlic bread can be made without dairy, substituting olive oil instead. https://www.pizzaexpress.com/vegan-choices

Zizzi Italian
Zizzi now have a vegan menu offering vegan pizza and pasta (both with vegan cheese), garlic bread, vegan sorbets, as well as wines that are suitable for vegans BUT you have to ask for the vegan menu. Vegan cheese made from rice.
https://www.zizzi.co.uk/data/prices/Allergen_Menu_MB_Vegan.pdf

Pizza Hut
Vegan cheese now available at eat-in restaurants. Their Pan, All American Thin and Flatbread crusts are vegan. Apparently so are the bacon bits!
https://www.pizzahut.co.uk/restaurants/blog/vegan-pizza/

​Village Pizza
This chain of South London based pizza take-away shops can veganise your pizza and they stock vegan pizza toppings including fake meats villagepizzauk.com/

Firezza Pizzas
Pizza collection/delivery - located in parts of North, South and West London and beyond. Violife vegan cheese available on any pizza. http://firezza.com/locations.php

Voodoo rays
Offer pizza by the slice and have a vegan pizza on offer. Located in Shoreditch, Dalston, Peckham, and Camden Town. More details from their website